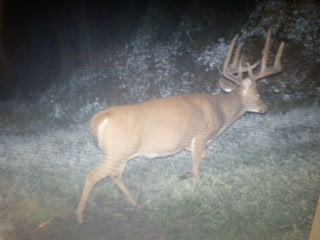 Thanksgiving morning 2011 will be a morning that Gary will not soon forget.  The Unexpected Guest was a deer we named  "The Great 8".  He is a 5 1/2 year old eight point and we have been tracking him closely for the past three seasons.  We passed him the last two years and captured him on video twice only hoping that he would "blow up" at 5 1/2.  We also had had his sheds from 2009 and 2010 and were pumped that he made it through.  In July we started getting trail camera photos and although he had incredible G2's and a horse of a body it appeared that his rack barely grew only adding about 6 inches of antler.   We decided it was TIME to try to take him and he became the number one deer on Gary's hit list. 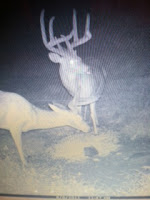 Early Thanksgiving morning, after a rattling sequence around 8:15 am "The Great 8" made his first appearance this season and proceeded to provided quite a show.  He was within Gary's sight for almost a half an hour and provided an incredible hunt that kept him on pins and needles the whole time.  It is times like these that you forget about being cold, forget about everything you have to do this afternoon and your mind is focused on one thing and one thing only.  It was TIME for Gary to take "The Great 8".  After a solid 37 yard shot the Easton Full Metal Jacket did it's job and the rest is history. Not only had Gary arrowed one of his most wanted Hitlist bucks, he did it all on film! Congratulations to Gary on an incredible journey! 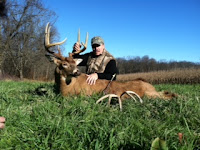 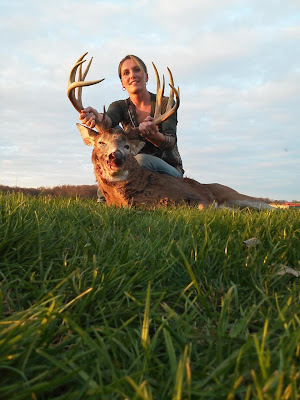 Posted by Bitmore Outdoors at 7:51 PM No comments: 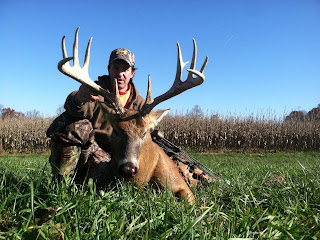 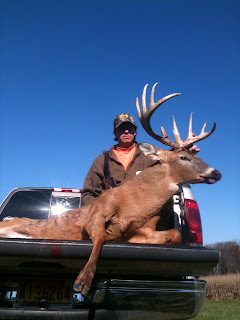 
He is a buck that we had history with over the past three years.  In the spring of 2009 Gary found Hi Wall's shed and we figured that he had some potential but didn't get to excited. He had great mass but fairly short tines and we figured he was a 3 1/2 years old. We looked forward to seeing what he would turn in to in 2010.  It is hard to believe but with all of the cameras we have on the farm we did not get a single trail camera photo of him that summer or fall.  Matt and Brendan saw him once in the rut of 2010 and got some footage of him.  After reviewing the footage it looked like he had grown and were excited to see if we could find his sheds that spring.  Gary found his second shed in the spring of 2011 and the peices of the puzzle were starting to develop.  We were really excited to see that he made it through the season and were anxious to see him in the 2011 hunting season.  In July of 2011 we finally captured him on trail camera and he grew and put on width and mass and really had the WOW factor!  We were pumped to say the least.  We knew he was 5 1/2 years old and figured he would be close to 160" by the time he finished growing.  Mathew and Mike were on his trail and took the surviellance information that was gathered and developed a plan to put him on the ground.  They figured that he was living in a small area and they would stay persistent and keep hunting the outskirts of his core area and not put to much pressure on him.  They were determined and figured that they would hunt him at least twice a week from the Sept 15th opener until the end of season or however long it took to cross his path.

It did not take long ....  On the morning of November 12th Mathew connected and made a perfect 30 yard shot on Hi Wall!  He even self filmed the hunt and captured it all on video....  Unfortunately Mike was not with him that day as he got sick.  It was almost the first hunt that he missed with Matt all season.
Hi Wall is quite an impressive creature and looked tremendous on the hoof!  He has a great frame and with great mass and palmation throughout his main beams!


Now it is on to the next chapter and time to CHASE another mature whitetail!  The CHASE never gets old and there is nothing more challenging then targeting a particular buck that has survived several hunting seasons.
Posted by Bitmore Outdoors at 8:22 PM No comments:

The action has been fast and furious and the rut is in full swing.  We expect that the timing of the rut, the full moon and cooler mid day temps caused it to happen but we experienced excellent mid day buck movement last week.  We have never seen it so pronounced!  In fact, we had a group of hunters in Iowa last week and out of the 20 mature buck sightings while they were on stand 15 of them were seen between the hours of 10:30 - 2:00.  Several of us sat from daylight until dark and we experienced most of the action between 10:30 - 2:00!

It is a great time to be in the woods....  The first round of does have been bred and there are now bucks "in between" does.   They are cruising looking for their next girlfriend and if you hunt funnels and pinch points you might just be lucky enough to put your tag on a big boy!

We believe that the next two weeks is one of the best times to see the "BIG STABBIE" that is just passing through your area because he has bred the does in his core area and is now expanding his search into unfamiliar territory!  He probably won't stick around long before he returns to his home range so make sure you are ready to kill him when you see him that first time!
Posted by Bitmore Outdoors at 11:36 AM No comments:

NOVEMBER 2nd A DAY TO REMEMBER 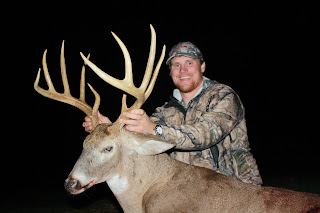 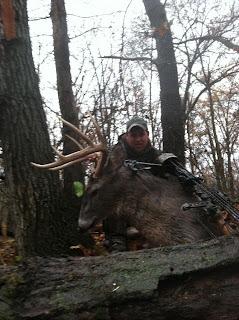 November 2nd -  A day to remember!

Brendan shoots and scores AGAIN!  Except this time it is not with a lacrosse stick but a bow and arrow!  We won't tell the full story yet but last night Brendan had not even made it into the stand when he ran an arrow through Old Yeller!!!!  Thats right Old Yeller and six other bucks were chasing a hot doe across the field and he made a fatal mistake and met Brendan's Rage tipped Full Metal Jacket!!!  Story to follow


Matt, Bob and Mike arrived in Iowa Saturday.  The hunt started out slowly due to some warm weather and it seemed like the bucks were not really rolling yet.  However on 11/2 some much needed rain and a cold front got them moving and we got the call from Matt last night saying that he shot one at last light and was going to start the tracking job this morning.  Sounds like a good one and we hope to follow up with the video and story when they return!
Thanks for watching and following us on Bitmore Outdoors
Make sure to watch this weeks episode of Brendans story on his hunt with "Old Yeller and Jake Takes out "Dragon"
Posted by Bitmore Outdoors at 12:38 PM No comments: 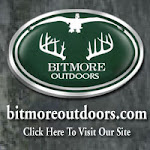